From IdleRPG Wiki
Jump to navigation Jump to search

Zerekiel is the boss of the raid in the IdleRPG Community Server who spawns at random times and anyone with an account can join the raid on the raid website.To Get Pinged On the support server when one starts do: ??iam Raider. 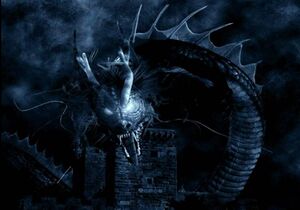 Zerekiel as seen when a Game Master spawns a Raid.

The raid will be spawned by an IdleRPG admin who uses the command $spawn [hp].

Each player starts with 250 health points. In the raid, all the players fight against Zerekiel in different rounds. Every round has two phases:

1. All the raiders attack Zerekiel at once.

2. Zerekiel attacks one of the raiders.

The attack damage of every player that is still alive, factoring in their raidstat multipliers, is added together. This is the amount of damage that will be dealt against Zerekiel in the attack.

End of the battle

There are three different ways a raid can end:
1. The raid times out, because the raiders failed to defeat Zerekiel within 45 minutes.
2. Zerekiel kills all the raiders.
3. The raiders kill Zerekiel and he will divide his drop of gold (his hp divided by the number of surviving raiders) through all the survivors and by 4 and also drop a legendary crate people can bid on.

If the third option happens, where the raiders successfully kill Zerekiel, an auction begins for a legendary crate. Raiders who survived have the opportunity to bid their money on the crate. As in any auction, players must bid above the current highest bid. If 60 seconds elapses without a bid, then the highest bidder at the time wins the crate, for the price that they bid.

All survivors of the raid will also get paid a share of Zerekiel's payout. The total payout is equivalent to the amount of health that the dragon spawned with, divided by 4. This is then equally divided among all the survivors.

The name Zerekiel comes from an earlier member of the staff team who named himself like that in some other games and then suggested that name for the raidboss.